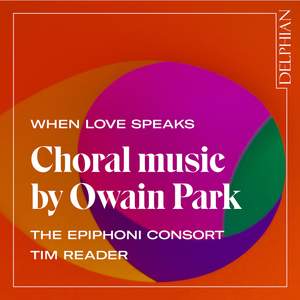 I’m not sure Epiphoni’s forwardthrusting, full-blooded sound suits music that delights in elision and occlusion, in soft, fraying edges. Park’s are not loud statements; the interest is all in... — Gramophone Magazine, August 2020 More…

Park: Sing to me, windchimes

I. Sing to Me, Windchimes

Interlude. The Inundation of the Spring

III. Star of the Frost

Interlude. A Wind That Woke a Lone Delight

V. Into My Heart an Air That Kills

VI. Life has a Loveliness to Sell

Park: Antiphon for the Angels

I. Love Is a Smoke

II. Love, Whose Month Is Ever May

III. So Sweet a Kiss

Park: Holy is the True Light

III. Now It Is the Time of Night

V. Be Not Afeard

The Epiphoni Consort follow up on their acclaimed debut, of music by David Bednall, with a portrait album of another young choral composer on the ascendant.

Owain Park’s musical tracks were set early, when he joined the choir of St Mary Redcliffe, Bristol as a boy chorister. Subsequently organ scholar of Trinity College, Cambridge, he draws - while still only in his twenties - on a specifically English tradition of text-setting and choral writing which links him to such figures as Stanford and Vaughan Williams.

His innate understanding of the medium is shown in the skilfully contrasted weights and colours of Shakespeare Songs of Night-Time, one of two Shakespeare cycles included here, and the Epiphoni Consort singers make the most of the luxuriant chordal writing that characterises Park’s style as a whole - what his former teacher John Rutter has described as ‘towers of sound’.

The choir is joined by a solo violin for the call and response patterns of Antiphon for the Angels, while Sing to me, windchimes movingly sets loss and yearning alongside poetic images of spring and youth.

I’m not sure Epiphoni’s forwardthrusting, full-blooded sound suits music that delights in elision and occlusion, in soft, fraying edges. Park’s are not loud statements; the interest is all in the detail, the precise marriage of text and tone colour. But a whisper can carry further than a shout, and I suspect we’ll be hearing a lot more from him.

Park’s choral writing is engaging and approachable for singers and listeners alike, but never lapses into blandness or sentimentality; there are whispers of his mentor John Rutter in the opening track Louisa, but the Shakespeare Songs of Night-Time are altogether darker and edgier, the text delivered with unmannered clarity by the fresh young voices of the Epiphoni Consort.