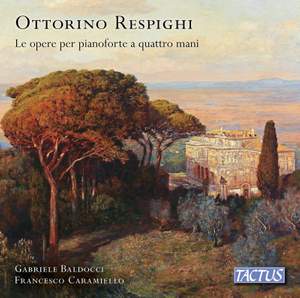 It may seem curious, or at least eccentric, to present a cd containing a composer’s transcriptions for four handed piano of some pieces of his own that are regarded as exemplary and extraordinary particularly for their orchestration – this opinion is undoubtedly deserved by two of Respighi’s three famous tone poems in several movements, but probably also by his suites of Antiche danze e arie, which moreover had been expressly conceived as“specimens”of re-invention and orchestration.The fact is that Respighi’s fame as a composer of symphonies and a magician of the orchestra has perhaps overcast his great talent as a pianist and his indubitable mastery of the instrument, which were so considerable as to make it possible for him to perform,as a soloist, in the premieres of some decidedly complex concert pieces for piano of his,that is the Concerto in modo misolidio (1925) and theToccata for piano and orchestra (1928).The transcription of the works presented on this CD,personally edited with great accuracy by the great Italian symphonist,reveals something more than the classical - and, in those days, we could say 'necessary' - piano reduction of his great symphonic works: Gabriele Baldocci and Francesco Caramiello guide us to the listening of these masterpieces, in which it is possible to see - free of the orchestral mixture and colors - the 'heart' of Ottorino Respighi compositional art.