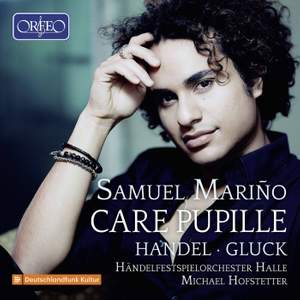 Care pupille is a stellar debut. Mariño’s voice is bright and clear, and falls easily on the ears. It is brilliant but not shrill. This CD, and the singer that it introduces, made me sit up and... — Fanfare, Nov/Dec 2020 More…

‘This album is unique in every respect. It includes first recordings of works that are sensationally beautiful and that have never been heard before. And then there is a voice, a male soprano, singing for the first time in 250 years arias that no man before him has been able able to perform. I think that his voice is so well-suited and has the ability to make us hear and feel the beauty of this sound and the very special art of the 18th century.’ - Michael Hofstetter, conductor ‘Gluck and Händel, these are my two masters. They are such important composers to me, and they even performed together in London. It’s a wonderful idea to present again this programme.’ - Samuel Mariño, male soprano Samuel Mariño has already appeared as soloist on European stages. In 2017/18, he won the interpretation award at the Opéra de Marseille International Singing Competition and the audience prize at the Neue Stimmen competition in Gütersloh. In 2018, he made his opera debut at the Handel Festival in Halle in the opera Berenice, singing the role of Alessandro. His sensational performance led to several nominations for Best New Artist by the Magazine Opernwelt. He will also appear in the Händel Festspiele 2020 as Teseo in the opera of the same name.

Care pupille is a stellar debut. Mariño’s voice is bright and clear, and falls easily on the ears. It is brilliant but not shrill. This CD, and the singer that it introduces, made me sit up and take notice, and I hope that it will do the same for you.

Mariño’s flutey, feminine timbre (though you’d hardly mistake him for a female soprano), agile coloratura and ease above the stave immediately impress in a frisky aria from Handel’s Berenice. In a rapt ‘Care selve’ from Atalanta he displays his command of messa di voce...and a true trill, another 18th-century must-have…The Halle period band give punchy, rhythmically precise support.

I urge lovers of good singing to explore this superb singer.

He has a voice of great natural beauty and a phenomenal technique...In brief, when it comes to singing per se Mariño is quite simply the most extravagantly talented male soprano I have yet heard...Just occasionally the singer’s youthful exuberance overcomes taste, especially at cadenzas.