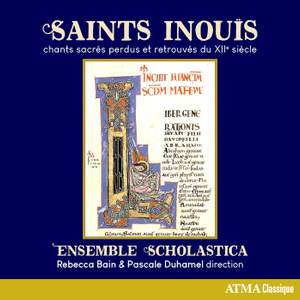 Feast of the Conception of the Virgin

First Reading from "The Life of St. Pardulf"

Second Reading from "The Life of St. Pardulf"

With Saints inouïs, Ensemble Scholastica offers a unique exploration of medieval sacred music from the Creuse (France), a musical heritage dating back nearly a thousand years. These distinctive songs were composed and sung for liturgies in honor of Saint Pardoux, Saint Yrieix, and the Conception of the Virgin. Ensemble Scholastica is Canada’s only female vocal ensemble specializing in the performance of medieval plainchant and polyphony from the 9th to the 14th centuries. The service for St. Yrieix is likely the oldest of those presented on this recording: the modal formulas and ranges are typical of the Gregorian repertoire of the great manuscripts of the 10th and 11th centuries. The services for St. Pardulf and the Conception of the Virgin likely date from the 12th century, when liturgical chant had already distanced itself considerably from the earlier tradition. Founded in 2008 by musicologist Pascale Duhamel, Ensemble Scholastica is a group of talented and dedicated vocalists from Montréal’s thriving early music community, some of whom also play medieval instruments. Leading medievalist Rebecca Bain has directed the ensemble since 2012.