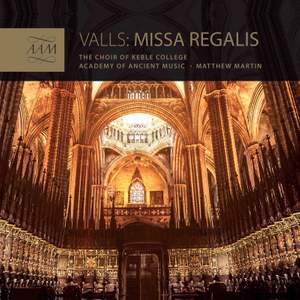 The Choir of Keble College, Oxford, Academy of Ancient Music

The choir has been prepared expertly and rehearsed thoroughly, and the singing is clean and cohesive throughout. The continuo playing was subdued and unobtrusive, but almost too much so. I was... — Fanfare, Nov/Dec 2020 More…

Much of the music of Baroque Spain remains obscure, despite the fact that many Spanish composers of a previous era – Cabazón, Arouxo and Cabinilles – have retained greater notoriety. During the 16th century, Spain benefitted from a rich musical interchange with Italy, but that ran drier by the end of the century and musical influences faded. Spanish music continued to develop from its own resources and the voice of Francisco Valls stands out in this newly arrived “Baroque” era in Spain. Based in Barcelona, he is best known for various theatrical works and his Missa Scarla Aretina (1702), a controversial mix of old and new, infamous for its flagrant disregard of various established musical practices. The Choir of Keble College is delighted to collaborate with the Academy of Ancient Music to bring to life another important work, Valls’ “forgotten” Missa Regalis (1740) in a new edition by Simon Heighes, unlikely to have been heard since part way through the 18th century. Although smaller scale than his earlier Missa Scarla Aretina, it is a refreshing (and sometimes fascinatingly illogical) combination of ancient and “modern”. We hope that this recording, and Simon’s new edition of the score, encourages further performances of this piece along with greater interest into the life and works of this somewhat unconventional musician.

The choir has been prepared expertly and rehearsed thoroughly, and the singing is clean and cohesive throughout. The continuo playing was subdued and unobtrusive, but almost too much so. I was excited to see a bass violin and dulcian listed in the personnel, but I would have loved to hear more from these instruments.

Extraordinary sequences of dissonant suspensions and harmonic invention (‘Qui tollis’) and a profoundly beautiful ‘Crucifixus’ exemplify the technical precision, shaded sonorities and articulate polyphonic detail achieved by the Choir of Keble College, Oxford...At only just over 40 minutes, the album is not generously filled – but Valls’s Mass is fascinating and the music-making is top-notch.