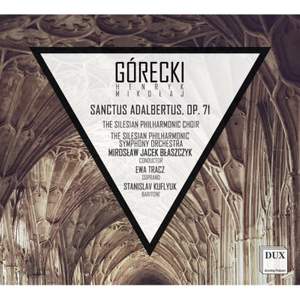 This album is the world premiere recording of Gorecki's Sanctus Adalbertus, commonly referred to as the so-called Big Adalbertus. The case of Sanctus Adalbertus, op. 71 by Henryk Mikolaj Gorecki is particular due to the way of its presentation to the world. This oratorio was created in 1997 to commemorate the 1000th anniversary of the martyrdom of St. Adalbert. It was to be performed during a pilgrimage of Pope John Paul II to Poland. Unfortunately, due to the composers illness, the premiere did not take place. His son, Miko 322;aj Gorecki, found the oratorios manuscript in the archive of the composer. On 4 November 2015, five years after the death of its creator, Sanctus Adalbertus could be heard for the first time in the world during a gala concert at the ICE Krakow Congress Centre on the occasion of the 70th anniversary of the establishment of the Polish Music Publishing House.