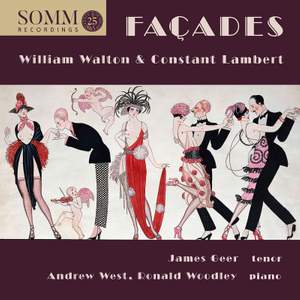 Tenor James Geer has a recitalist’s voice...His contribution is thoughtful and enjoyable. The two-piano works are beautifully polished, and recording quality is excellent. This program is very... — Fanfare, Nov/Dec 2020 More…

Walton: As You Like It: Under the greenwood tree

No. 8, The Long-Departed Lover

"SOMM Recordings explores one of the most significant partnerships in 20th-century British music with Façades, a disc of piano-accompanied songs and music for four-hand piano by William Walton and Constant Lambert. The two shared a friendship of nearly 30 years until Lambert’s death in 1951, aged 45. Façades takes its title from Walton’s era-defining “entertainment”, heard here in arrangements for four-hand piano of its two orchestral Suites by Lambert – regarded by Walton as the definitive reciter of Edith Sitwell’s nonsense verses. Lambert’s Trois pièces nègres pour les touches blanches for piano duet are a kaleidoscopic, jazz-accented tour de force exploration of the piano’s white keys. Described by the composer as an “idyll”, Walton’s Siesta (also for two-player piano) is, says Ronald Woodley in his entertaining and informative booklet notes, “infused with the clear light and open charm of Italy”. The eight song settings by Lambert of poems by the eighth-century Chinese poet Li Po are “exquisitely crafted, restrained and often enigmatic miniatures [marked by an] elusive and allusive musical style”. Completing the recital, a selection of songs by Walton range from Tudor pastiche (Under the Greenwood Tree) to the atonal-inflected Tritons and lyrically captivating Beatriz’s Song."

Tenor James Geer has a recitalist’s voice...His contribution is thoughtful and enjoyable. The two-piano works are beautifully polished, and recording quality is excellent. This program is very much worth hearing.

It was Lambert who, as an accomplished pianist himself, made the piano duet arrangements which appear on this recording, crisply and sympathetically rendered by Andrew West and Ronald Woodley…[Lambert's miniatures] are also performed with an empathy and stylistic awareness (especially the final ‘cake-walk’ movement).