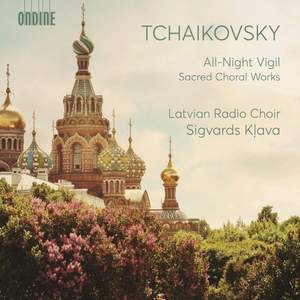 Here is choral singing of beguiling sophistication, beautifully recorded, that captures the score’s full range of expression, from hushed moments of introspective awe to rolling climaxes of intense... — BBC Music Magazine, August 2020, 5 out of 5 stars More…

No. 3, Kathisma. Blessed Is the Man

No. 8, Polyeleion. Praise the Name of the Lord

No. 11, Having Beheld the Resurrection of Christ

No. 12, Common Katavasia. I Shall Open My Lips

No. 15, Theotokion. Both Now and Forever

No. 17, To Thee, the Victorious Leader

Tchaikovsky: Hymn to Cyril and Methodius

This album presents a sequel for the award-winning album (ICMA Choral disc of the year) of Tchaikovsky’s sacred choral works by the Latvian Radio Choir and conductor Sigvards Kļava. These two albums together form the composer’s complete sacred works for the choir. The All-Night Vigil Op. 52 for mixed choir, also known as the Vesper Service, was written between May 1881 and March 1882. It was first performed by the Chudovsky Chorus conducted by Pyotr Sakharov in Moscow at the concert hall of the All-Russian Industrial and Art Exhibition on 27 June 1882. Tchaikovsky described the work as ‘An essay in harmonisation of liturgical chants’. For this work the composer carefully studied the tradition of musical practice in the Russian Orthodox Church, which could vary considerably from one region to another. This beautiful, yet rarely recorded work is accompanied by four other choral works all written during the same decade: Hymn in Honour of Saints Cyril and Methodius as part of commemorations of the 1000th anniversary of the death of Saint Methodius, A Legend, originally coming from the collection Sixteen Songs for Children, Jurists’ Song, for the 50th anniversary of the founding of the Imperial School of Jurisprudence in St Petersburg, and The Angel Cried Out, a beautiful traditional Russian Orthodox Easter hymn and Tchaikovsky’s final choral work.

Here is choral singing of beguiling sophistication, beautifully recorded, that captures the score’s full range of expression, from hushed moments of introspective awe to rolling climaxes of intense celebration...The icing on the cake is provided by four choral rarities dating from the 1880s.

Tchaikovsky’s setting of ‘Svete tikhi’ (‘Gladdening Light’) is one of the highlights of the set, and the Latvian Radio Choir are alive to its every nuance, balancing a marvellous delicacy of sound against luminously energetic counterpoint. ‘Blagosloven yesi Gospodi’ similarly brings out the best from these singers, with its rapid oscillations between one dynamic and another, one speed and another…The quality of both singing and recording is superb.