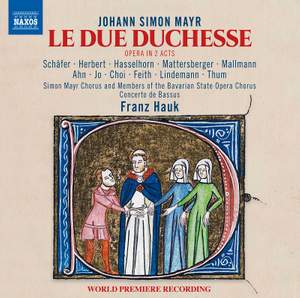 Comincio a poco a poco

As one of the leading operatic composers of his generation, Johann Simon Mayr nurtured a fascination with the chivalric stories of medieval England. Le due duchesse, an opera semiseria with buffa elements, is set during the reign of the 10th-century King Edgar. Huntsmen’s and Knights’ choruses and troubadour-like songs give great vivacity to a score that is both lyrical and dramatic. Mayr’s compound of Viennese Classicism and Italianate melodic beauty, allied to his ambitious writing and a skilful libretto, produced an important and influential opera couched in his own unmistakable idiom.