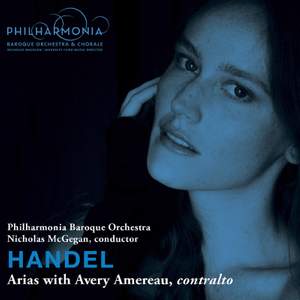 Avery Amereau’s sonorous contralto is ideal for this repertoire. ‘Cara sposa’ from Rinaldo is exquisitely shaded with a beautifully ornamented da capo, and the two arias from Giulio Cesare are... — BBC Music Magazine, November 2020, 4 out of 5 stars More…

George Frideric Handel lavished particular attention on the contralto or mezzo-soprano roles in his operas and oratorios throughout the years. What better way to celebrate the lush arias that Handel composed for his contralto stars than with Avery Amereau—described by The New York Times as "an extraordinary American alto on the rise"—alongside Handelian scholar Nicholas McGegan and Philharmonia Baroque Orchestra. Featuring virtuosic, passionate, stirring arias throughout Handel's composing career—from his early Aci, Galatea e Polifemo (1708) to his later Alcina (1735)—this recording brings to life the incredible music once sung by Nicolini, Senesino, and Carestini. This debut album by Amereau marks the last recording of Nicholas McGegan at the helm of PBO.

Avery Amereau’s sonorous contralto is ideal for this repertoire. ‘Cara sposa’ from Rinaldo is exquisitely shaded with a beautifully ornamented da capo, and the two arias from Giulio Cesare are deeply moving...The Philharmonia Baroque Orchestra, directed by Nicholas McGegan, one of today’s preeminent Handelian conductors, provides much more than mere accompaniment, participating fully in the drama of this rewarding collection.

Her burnt umber tones – smoothly produced, never forced – are a pleasure in themselves. Beyond this, she brings to each of these Handel arias, mostly written for castrato, abundant musical intelligence and a specific sense of character...Amereau sets the seal on a more than promising debut recital with a true and tender performance of Ruggiero’s ‘Verdi prati’ (Alcina), subtly shading the vocal line and delicately ornamenting the refrain on repeats.