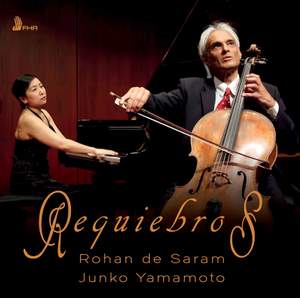 Gaspar Cassado's Requiebros, dedicated to his teacher Pablo Casals, was one of the few pieces which Rohan de Saram studied with him and heard him perform many times. During the first two decades of the 20th century in Paris, Cassad came into contact with both de Falla and Ravel. Hence the inclusion of works by de Falla and Ravel on this album.

Schumann's Funf Stcke im Volkston was inspired by folk idiom as was de Falla's Suite populaire espagnole. Granados, Faure and Saint-Saens were composers closely connected either as friends or as teacher-pupil with de Falla and Ravel during that period in Paris. De Saram and Yamamoto performed this programme at the Takefu International Music Festival, Japan at the invitation of the director, the composer Toshio Hosokawa, whose Lied III formed part of the programme.