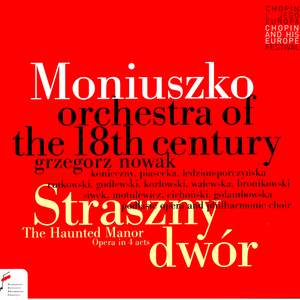 Orchestra of the 18th Century

As in Flis, one seems to move with ease from the world of Beethoven to those of Tchaikovsky and Verdi, and the articulation and phrasing of the Orchestra of the 18th Century bring the necessary... — Gramophone Magazine, August 2020 More…

This is the first recording on period instruments of Moniuszko's Opera in Four Acts, The Haunted Manor which was written in 18611862. Intoxicated by the Warsaw success of Halka which unexpectedly raised him to the pinnacle of his career, Moniuszko was full of enthusiasm and wanted to write more operas but his collaboration with Wlodzimierz Wolski had ended and he needed a new librettist. Jan Chechinski (18261874) appeared on the horizon who was an esteemed translator of operatic libretti (French and Italian, including for Giuseppe Verdi) who would become the composer's new regular collaborator. The libretto of The Haunted Manor, regarded as Chechinski's finest work, was completed in mid January 1862. It soon came into the hands of the composer, who by June had probably finished a piano reduction of the new work, and possibly also part of the orchestration. The opera's manuscript authorised by the composer was copied out clean between October 1862 and 9 January 1863. In both musical and dramatic terms, The Haunted Manor contains many references to the French opéra-comique, of which the unquestioned masters during the nineteenth century were considered to be the now forgottenbut admired by MoniuszkoParisian composers Adolphe Adam (18031856) and Daniel Auber (17821871). Present-day music lovers will easily recognise the rhythms of Polish dances (polonaise, krakowiak and mazur) yet in The Haunted Manor we also hear echoes of cosmopolitan drawing-room dances: waltz, polka, galop and even minuet. However, the hidden patriotic message and the references to the myth of the Polish nobility, reiterated with pathos, made The Haunted Manororiginally conceived as a musical comedya semi seria opera which makes it a Polish operatic epic. The Orchestra of the 18th Century, specialising in the restoration of the original version of music from the past, performs the first ever recorded version of this work on historical instruments, conducted by Grzegorz Nowak.

Orchestra of the 18th Century

As in Flis, one seems to move with ease from the world of Beethoven to those of Tchaikovsky and Verdi, and the articulation and phrasing of the Orchestra of the 18th Century bring the necessary clarity without sacrificing any expressive depth...the cast of Polish singers is very strong indeed. Bass-baritone Tomasz Konieczny as Miecznik and soprano Edyta Piasecka as Hanna are particularly impressive, but in fact the sense of ensemble is so strong that is seems invidious to single out particular singers.

The playing across all sections of the orchestra is light and fleet-footed yet sonorous, revealing the depth of colour in Moniuszko’s orchestration...the tenor Arnold Rutkowski brings lightness and plangent tone—a Lensky voice, as it were—to Stefan, and the baritone Mariusz Godlewski supplies strong, muscular sound as Zbigniew.

Nowak conducts his Orchestra of the 18th Century with infectious elan. A sizzling rediscovery.