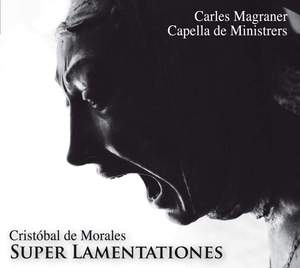 Morales Lamentations were his best-known works, together with his Masses and Magnificats. This repertoire enjoyed an extraordinary international fame in Europe and the New World within the context of Pre-Tridentine and Post-Tridentine liturgy, owing principally to the fact that these works were composed to be performed in some of the most prestigious chapel choirs of the Renaissance. This recording by Capella de Ministrers recovers the interpretative con- text of this repertoire in acccordance with the musical practice of Emperor Carlos V's Royal Chapel Choir, whereby the Lamentations were sung polyphonically with an instrumental accompaniment on violones.