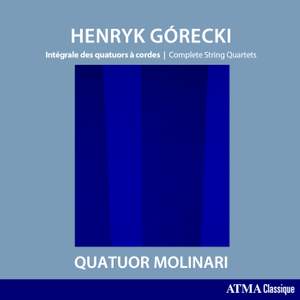 Known worldwide for his Symphony No. 3, 'Symphony of Sorrowful Songs', Polish composer Henryk Grecki enjoys an exceptionally high profile as a composer of contemporary music. Now the Molinari Quartet has chosen to explore Gorecki's chamber works with this new recording of his complete string quartets.

Each quartet bears a descriptive title. The first, 'Ju? si? zmierzcha' (Already dusk is falling), is named after the opening line of a motet by a Polish Renaissance composer. The second, 'Quasi una fantasia', invokes Beethoven, acknowledged by Gorecki himself as his muse for his first two string quartets. The title of the third quartet, '... songs are sung', comes from a line by the Russian poet Velimir Khlebnikov.

The Molinari Quartet has established itself as one of Canada's leading string quartets and has received nineteen Opus Prizes from the Quebec Music Council in recognition of its musical excellence. Critics describe the Molinari Quartet as an "essential" and "prodigious" ensemble, and "Canada's answer to the Kronos or Arditti Quartet.

The Molinari Quartet's recordings on ATMA Classique include the complete quartets of Schafer, Schnittke, Kurtg, and Gubaidulina. These albums have received international critical acclaim including two Editors' Choices by Gramophone magazine and rave reviews from The Strad, Fanfare, and Diapason, among others. The Molinari's recording of the complete Kurtag quartets received a 2016 Diapason d'Or and the 2017 Echo Klassik award for 20th and 21st century chamber music.

"All three of Gorecki's quartets have appeal, but his Third, Songs Are Sung, is quite the cinematic journey. The Molinari's deliver a robust and engaging reading." 4 STARS - BBC Music Magazine