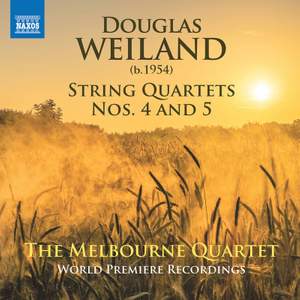 British composer Douglas Weiland has long been acclaimed as one of contemporary music’s most outstanding composers for the string quartet medium, and his evolving cycle has won much admiration. Composed between 2011 and 2012 the Fourth and Fifth Quartets show him at the height of his artistic powers, where he seeks connections across time, and shows a Classical commitment to form, invention and melodic beauty. His conceptions can be Schubertian in scale and scope, while also displaying the influence of Haydn and Bartók.