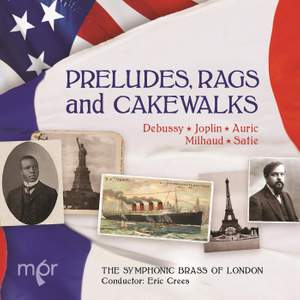 This classy, sassy collection of transcriptions of music by Debussy, Milhaud, Satie, Joplin and Auric could be just the tonic you need in these unsettled and unsettling times, regardless of whether... — Katherine Cooper, Presto Music, April 2020 More…

Debussy and other French colleagues became fascinated by the ‘ragtime’ music and ‘cakewalks’ beginning to be performed at the end of the 19th century by negro minstrel groups and which gave birth to jazz. The now acknowledged master of ragtime was of course the American composer Scott Joplin, many of whose compositions are featured on this brilliantly performed and recorded CD. World famous trombonist, composer and arranger Eric Crees has researched the performance style of Joplin’s music and its influence on Debussy and other French composers. He has arranged eight of Joplin’s piano pieces for 10 brass players and two percussionists and has similarly arranged a selection of thirteen ragtime and jazz-influenced piano pieces by Debussy, Auric, Milhaud and Satie, providing a highly entertaining and virtuosic series of performances, which often makes one wonder whether this music could ever have been composed in any other way!

This classy, sassy collection of transcriptions of music by Debussy, Milhaud, Satie, Joplin and Auric could be just the tonic you need in these unsettled and unsettling times, regardless of whether or not brass ensemble repertoire is your usual line of country: everything really sings and dances, with Joplin’s Weeping Willow and Satie’s Parade standing out as particular highlights.

Crees has gone to painstaking lengths to retain a degree of authenticity in his music...As one might expect, the playing is of a terrific calibre throughoutThe recording, which was made in London’s Henry Wood Hall, authentically captures the individual and collective sounds produced by these eminent musicians. Accompanied by detailed, informative sleeve notes, it makes for an engaging chamber brass recording which would be a worthy addition to any listener’s library, arranged and performed by musicians of the highest calibre.

From the first of its 21 tracks, the listener can be in no doubt about the quality of the featured ensemble...The sound produced is also to be admired; great balance and clarity at all dynamics, placing the listener in the front row to enjoy the music-making. The new arrangements, the uncovering of neglected gems and the general body of research involved in this project makes it an impressive release.