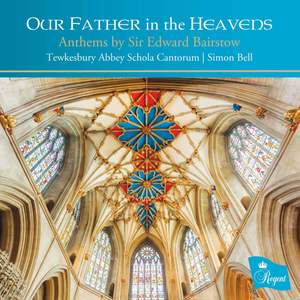 Our Father In The Heavens

Bairstow: Lord, I call upon thee

Bairstow: Though I speak with the tongues of men

Bairstow: Lord, thou hast been our refuge

Bairstow: Our Father In The Heavens

Bairstow: The King Of Love My Shepherd Is

Bairstow: If the Lord had not helped me

Bairstow: Save us, O Lord

Bairstow: Jesu, grant me this I pray

Bairstow: Of The Father's Love Begotten

Sir Edward Bairstow (1874–1946) was one of the Britain’s most iconic composers of Edwardian sacred music. After holding posts in London, Wigan, and Leeds, he served as organist of York Minster from 1913 to his death, when he was succeeded by his former pupil Francis Jackson. He was knighted in 1932.

This recording features many of Bairstow’s best-loved anthems including Blessed city, heavenly Salem featuring the glorious concluding treble solo - sung here by the former BBC Radio 2 Young Chorister of the year, Cassian Pichler-Roca - together with Save us, Lord, Let all mortal flesh keep silence, and The Lamentation. There are two first recordings - Our Father in the heavens and Bairstow’s extended setting of Of the Father’s love begotten, and the recording includes perceptive notes on the music by former York Minster Director of Music, Philip Moore.

The combination of the gloriously acoustic of Tewkesbury Abbey and the Abbey’s magnificent and recently-restored Milton organ warmly embraces Bairstow’s expansive style and invites the listener in to this accessible and skilfully-written music.

Tewkesbury Abbey Schola Cantorum is the choir of men and boys which sings the weekday Evensongs in Tewkesbury Abbey. Founded in 1973, in the summer of 2006, the Abbey School closed and the choristers made the transition to Dean Close Preparatory School in Cheltenham, where they have been educated ever since. It is directed by Simon Bell.

‘...Overall, the Abbey's superb acoustics can be experienced as an integral and supportive aspect of the whole.’ EDITOR’S CHOICE, Organists’ Review June 2016 for ‘A Year at Tewkesbury’

‘...The unforced yet muscular sound of the men and boys' Schola Cantorum of Tewkesbury Abbey features on Christmas from Tewkesbury (Regent REGCD440), ... all delivered with poise.’ Choir & Organ November/December 2015

The unaccompanied pieces fare particularly well, especially the disc’s title-track...In comparison to the Westminster Abbey Choir’s disc of music by Bairstow, Harris and Stanford, the Tewkesbury choristers have the edge, with their vitality of tone, clarity of diction and willingness to stir up the underlying dramatic impetus...Bairstow’s organ parts are masterpieces in their own right, chock-full of colour and sumptuous quasi-orchestral detail. Carleton Etherington clearly relishes the challenge..Let us hear more Bairstow from these wonderful executants.