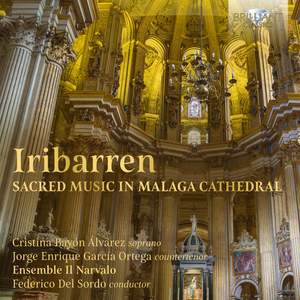 The album is a welcome introduction to Iribarren’s music. Federico del Sordo coaxes ardent and musically sensitive performances from a responsive group, and any minor glitches are rendered inconsequential... — Fanfare, Nov/Dec 2020 More…

First recordings of sacred motets and villancicos by a forgotten figure of the Spanish Baroque.

Juan Francés de Iribarren Echevarría (1699–1767) received his musical education at the Royal Chapel in Madrid. He was taught there by the composer José de Torres who, in 1717, recommended that Iribarren be appointed organist at Salamanca Cathedral. Sixteen years later Iribarren moved on to become maestro de capilla at the Cathedral of Málaga, the city in which he spent the rest of his life. On his death there he left a huge library of his own music – with the proviso that it not be copied and only performed at services in the cathedral. Such constraints have until recently prevented this marvellously vivid music from receiving the attention it deserves. The present album presents a tasting menu of Iribarren’s work in various genres and from different periods of his career, Italian vocal styles over native, more vernacular idioms. There are four pieces written to mark the Immaculate Conception, composed over a 22-year period from 1743 to 1764, all unique in form, all devotional but quite different in material and expression.

Irribarren’s technique encompassed transparent polyphony as well as solo-vocal motets of a homely, often bucolic character. Several pieces here were composed to accompany the exposition of the Blessed Sacrament, and these are more intimate in tone. The selection focuses on pieces written for one or two solo voices with a small accompanying ensemble, but during his time in charge of the music at Málaga Iribarren assembled a team of 30 singers and instrumentalists including a plainchant choir, cantors, wind and string players, organists and boy choristers.

The composer, organist, harpsichordist and conductor Federico del Sordo has a diverse discography on Brilliant Classics encompassing the full range of his musical talents and reviving several little-known Baroque composers such as Fasolo (95512), Bonelli (95816) and Salvatore (95146).

All of these recordings have drawn critical praise for del Sordo’s fine musicianship: ‘If early Baroque Italian devotional repertoire is an area that piques your interest, then this disc is as good a place as any to start, especially at its budget price. Recommended.’ (Fanfare, November 2016 – Salvatore)

Juan Frances de Iribaren was born near the Spanish town of Pamplona, and he received his musical education at the court of Madrid. He held the function of organist of the Salamanca Cathedral, where he stayed between 1717 and 1733. He then obtained the prestigious post of Maestro di Capilla of the Malaga Cathedral where he stayed till his death.

Iribaren left an enormous oeuvre of (mostly) sacred works, used for liturgical services in the Malaga Cathedral. This new recording offers an anthology of Motets, sacred arias, A Lamentation, a Cantata and a selection of Villancicos (a Christmas song, sung in Spanish).

The album is a welcome introduction to Iribarren’s music. Federico del Sordo coaxes ardent and musically sensitive performances from a responsive group, and any minor glitches are rendered inconsequential by the overall effect. The vocal soloists are easy to listen to, and the instrumentalists are cohesive and deft. Moreover, the recording has been done beautifully.