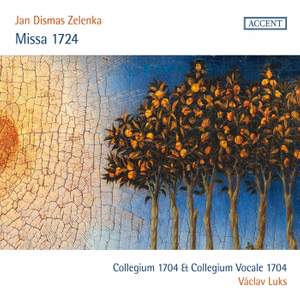 Zelenka was a direct contemporary of Bach - and there are flashes of harmonic and textural brilliance here to rival the German genius. Lively, light-footed performances — BBC Music Magazine, July 2020, 4 out of 5 stars More…

Jan Dismas Zelenka, the greatest genius of Czech Baroque music, was rediscovered only in the last 20 years and has since then experienced a great renaissance. Zelenka was employed as a musician at the Dresden court under August the Strong and later his son Frederick August II, where he wrote splendid church music works for his Catholic regent. The Prague Collegium 1704 has been promoting Zelenka's magnificent music for many years and has already produced four highly acclaimed CDs with music by this outstanding composer. The new CD is dedicated to several magnificent settings of individual mass parts from the years 1724-25. These pieces are characterised by a similar (large) instrumentation with oboes, bassoon and three trombones, which colourfully complement the strings. Vclav Luks has combined these individual movements into a "Missa 1724" and, with the soloists, the choir and orchestra of his Collegium 1704, he lets this wonderful music resound again for the first time in an accustomed excellent interpretation.

Zelenka was a direct contemporary of Bach - and there are flashes of harmonic and textural brilliance here to rival the German genius. Lively, light-footed performances

Collegium Vocale 1704’s arching phrases ebb and flow, with eloquent leaning upon Zelenka’s rich harmonic suspensions and a cultivated blend between all strands of textures. The excellent orchestra pay keen attention to sonorities and rhetorical vitality.