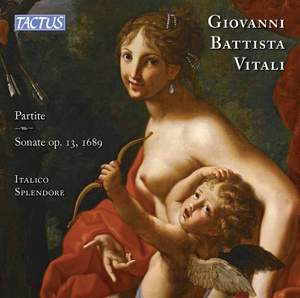 he musicianship has personality in abundance, and the musicians are sensitive to what the music seems to require. For example, in the Furlana from the second partita, Claudio Andriani allows... — Fanfare, Nov/Dec 2020 More…

II. Ruggiero per la lettera b

III. Bergamasca per la lettera b

IV. Chiacona per la lettera b

II. Bergamasca per la lettera b

III. Ruggiero per la lettera b

The city of Modena, under the rule of the Este family, was the capital of the Dukedom of Modena e Reggio.Thanks to Duke Francesco ii’s fondness for the violin, music became an essential element in the most important events at the Este court, such as receptions, weddings and official visits of foreign sovereigns.These were the occasions in which the Duke displayed all his magnificence. Modena stands out for the abundance of its collection of musical documents in the Biblioteca Estense: the library is a real mine, largely unexplored so far.This consideration gave rise to the idea of making this beautiful, extraordinarily modern music available to those who are “pursuing” culture and art. So our goal is to promote a rediscovery of the enormous heritage preserved in the Biblioteca Estense, by carrying out a meticulous study of the sources of the works of the composers who were active at the Este Court in Modena, transcribing them into modern notation and critical editions, and producing monographic recordings of them.The first step consisted in the study and recording of the instrumental works of Giovanni BattistaVitali. In this third of 6 CDs dedicated to his music preserved at the Estense Library of Modena, the baroque group Italico Splendore performs the Partitas and the Sonatas op. 13.The Partitas are formed of ten pieces for violone and eight for violin, in the form of variations introduced by a toccata.

he musicianship has personality in abundance, and the musicians are sensitive to what the music seems to require. For example, in the Furlana from the second partita, Claudio Andriani allows himself to sound like an (Italian) country fiddler. One almost wants to throw him a few coins. Overall, these spirited but never hard-driven performances make a fine case for Giovanni Battista Vitali.