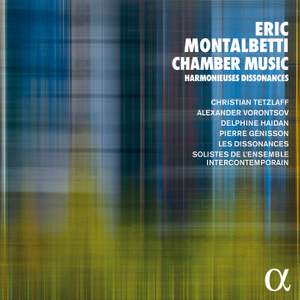 Each of the works contained on this disc receives a superlative reading—every one of them requires top-flight virtuosos to bring off, and Montalbetti has attracted an amazing group of such performers... — Fanfare, Jan/Feb 2021 More…

Harmonieuses Dissonances: that is the title of the string quartet that closes this second album of music by Eric Montalbetti, but above all it is a statement of the very subject of the works assembled here: they start out from heterogeneous elements, like the diversity of the people we know, or of our moods and thoughts, and aim – through encounters, comparisons, organisation or a search for common ground – to find the meaning of a life that we hope will, in the end, be harmonious. Since the first album of his music, Solos, appeared in 2016, Eric Montalbetti has been fortunate enough to hear seventeen of his scores come to life thanks to some wonderful musicians in France, Germany, Netherlands, Romania, Spain, Japan and Korea. Two duos (including a Hommage à Matisse), a piano trio and a string quartet, were premiered and have now been recorded by Christian Tetzlaff and Alexandre Vorontsov, Delphine Haidan and Pierre Génisson, the soloists of the Ensemble intercontemporain and the Quatuor Les Dissonances.

Each of the works contained on this disc receives a superlative reading—every one of them requires top-flight virtuosos to bring off, and Montalbetti has attracted an amazing group of such performers to do so. This well-recorded recital will appeal to those whose ears have been well attuned to the most challenging music of our era, and for them, the disc will provide ample rewards.

The stage seems set for a demonstration of unashamed eclecticism. The four works included here provide challenging workouts for some first-class performers, led by Christian Tetzlaff…[In Hommage à Matisse] Montalbetti shows just how successful he can be in blending a winning directness of expression with a subtlety that comes from constantly varied inflections of dynamics and tonecolour.

Montalbetti (who spent two decades working as an arts administrator and kept his music under wraps until a few years ago) counts Pierre Boulez and George Benjamin and among his influences, and it shows. The opening Duo receives an incisive yet lyrical performance from its dedicatee Christian Tetzlaff, and the Hommage à Matisse is every bit as colourful as the paintings which inspired it.