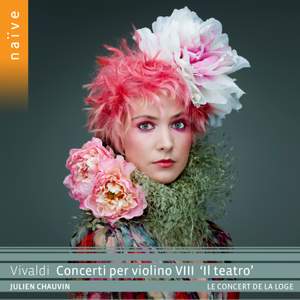 Chauvin and Concert de la Loge explore the myriad subtleties and gestures of the music with infectious vitality. They enliven Vivaldi’s thrilling tonal landscape at every turn with intuitive... — BBC Music Magazine, June 2020, 5 out of 5 stars More…

Vivaldi: Concerto for Violin Strings and Harpsichord in D RV217

This is the first time a French violinist has joined the line of prestigious solo virtuosi recording for the Vivaldi Edition.

Violinist Julien Chauvin and his Concert de la Loge - founded in 2015 and modelled on one of the most celebrated orchestras of the late 18th Century - here reveal all the discreet charms of an inventive concertante style rich in detail, featuring Vivaldi’s favoured instrument.

This particular set of concerti highlight the consistently close links between Vivaldi’s instrumental and operatic works.

“Transcending the difference of genre, the Venetian composer’s unitary conception of language and style allowed him to pass with the deft skill of a juggler from one domain to the other, making them happily converge on common ground,” writes Cesare Fertonani.

Chauvin and Concert de la Loge explore the myriad subtleties and gestures of the music with infectious vitality. They enliven Vivaldi’s thrilling tonal landscape at every turn with intuitive and spontaneous responses to the music’s often mercurial character. Chauvin negotiates the frequent passages of solo bravura with seeming insouciance…Altogether, this is glorious music-making.

Make sure you aren’t holding a cup of tea when you put this disc on. The opening chord is the first of many explosions of vigour in this latest addition to Naïve’s Vivaldi Edition...The playing throughout is full of energy, and there are plenty of highlights that bear mentioning. The Il Carbonelli Concerto, RV366, is particularly exciting. Chauvin’s tempo is enthusiastically fuelled by those around him.

Dazzlingly played by Chauvin and his French period band, they belie Stravinsky’s lazy claim that Vivaldi composed the same concerto 300 times — this is edge-of-the-seat material by the composer of The Four Seasons.