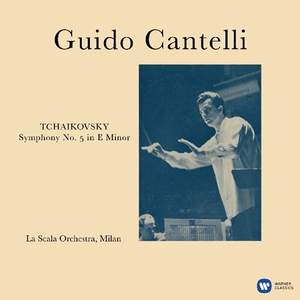 The very first 12" Long Play record issued by The Gramophone Company (EMI) on His Master's Voice (ALP 1001) in October 1952 – previously issued on 78RPM in 1951. The 27th April 2020 will mark Guido Cantelli’s centenary. Arturo Toscanini dicovered him during a 1948 rehearsal at La Scala and invited him to conduct the NBC Symphony in New York in January 1949. Widely considered as Toscanini’s heir, the very demanding Cantelli was invited by most pretigious orchestras in the world including New York Philharmonic, Boston Symphony Orchestra, La Scala, Philharmonia Orchestra... He tragically died in a plane crash on 24 November 1956 at the age of 36 just after having been named artistic director of La Scala. Cantelli’s live performances of Tchaikovsky’s Fifth Symphony created particular stir at their time. He took advantage of a London tour of La Scala Orchestra in September 1950 to do this recording. This version is now quite iconic and representative of Cantelli’s legacy. It has been remastered in HD from original tapes.