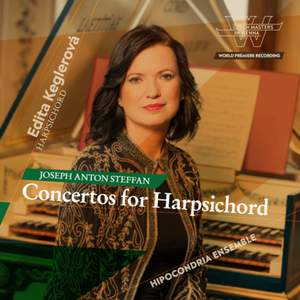 This CD includes four Concertos for harpsichord written by Joseph Anton Steffan who was one of the prominent composers of Czech origin who lived in Vienna in 18th century. His works are associated primarily to keyboard instruments - beside other compositions he wrote more than 40 keyboard concertos. Although he has been almost forgotten in music history, he was favourite composer amongst the noble families and rich burghers. Edita Keglerová graduated from Academy of Performing Arts in Prague under Prof. G. Lukšaité Mrázková. Then she pursued her studies in the master class of J. Ogg at the Royal Conservatory in the Hague and then at the Royal Academy of Music in London. She is a laureate of several international music competitions. She performed in many important concert halls. She founded with flutest Julie Braná the Ensemble Accento.Hipocondria ensemble was founded in 2000. Its repertoire is orientated on works of the early to late Baroque period to early Classicism and they have participated in many musical festivals in Czech Republic and also in abroad. The artistic director of the ensemble is the violinist Jan Hádek who graduated from Academy of Performing Arts in Prague.