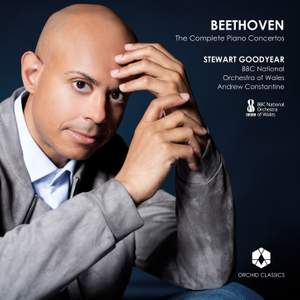 Goodyear is a pianist of tremendous clarity and precision. He has a beautiful, silver sound, with perfectly lucid trills that must be the envy of his colleagues. Overall, his music-making is... — Gramophone Magazine, May 2020 More…

Following the success of his previous Orchid Classics albums, Stewart Goodyear returns with his spirited, insightful interpretation of the complete Beethoven Piano Concertos, recorded with Andrew Constantine conducting the BBC National Orchestra of Wales for a release that coincides with Beethovens 250th anniversary year. Goodyear made his Orchid debut with an album of Ravels solo piano music, hailed as a major achievement (Classics Today). More recently, his sensational album with Chineke! Orchestra and Wayne Marshall featured Goodyears own music alongside Gershwins Rhapsody in Blue, the performance of which earned 5 stars in BBC Music Magazine. Now, Goodyear returns with perhaps his most ambitious recording yet: the complete Beethoven Piano Concertos. There is the Haydnesque wit of the Piano Concerto No.1, with its exquisite Largo; a pared-down, Mozartian orchestra for the Concerto No.2 with its playful Turkish finale; and in the Concerto No.3, premiered alongside the Fifth Symphony, Beethoven establishes a new intimacy between soloist and orchestra. This relationship reaches new depths in the intricately linked Piano Concerto No.4, and the set culminates in the majestic Emperor Concerto, No.5.

Goodyear is a pianist of tremendous clarity and precision. He has a beautiful, silver sound, with perfectly lucid trills that must be the envy of his colleagues. Overall, his music-making is reminiscent somehow of the young Rudolf Serkin...Andrew Constantine and the BBC NOW players provide clean, crisp partnership...These are expertly tailored Beethoven interpretations that may raise the benchmark in terms of objectivity.

The results are fleet-fingered, insightful and imaginative, capturing an essential sense of improvisation in the cadenzas (Goodyear is also a composer). The slow movements have a powerful inwardness...The BBC NOW and Constantine provide engaging support and response.