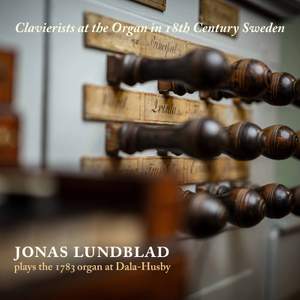 Clavierists at the Organ in 18th-Century Sweden

I. Allegro assai (Arr. B. Janáček for Organ)

Naumann, J G: Sonata for Glass Harmonica in A Minor

No. 3 in F-Sharp Minor. Andante

This recording is a modern portrait of the music that Swedish clavier-players might have carried to the organ in the latter half of the 1700s. Since hardly any Swedish music of the time was written exclusively for the organ, we must rely on historical sources for a sense of the possibilities. The selection offered here is largely a work of reconstruction, and except for the short movement by Roman, none of this repertoire has been recorded before, at least in this form for organ. Jonas Lundblad is an organist and musicologist. He studied church music in Malmö, Lübeck and Pitea, specializing in organ interpretation. A prolific freelance career performing both as an organ soloist and with choirs and orchestras has taken him to countries across Europe. When choosing repertoire, he looks mainly to the Romantic era and to new music and enjoys delving into the sources to discover unknown or forgotten works. While a student for Hans-Ola Ericsson, he performed the complete works of Olivier Messiaen. Since then, the music and mental landscape of Messiaen have remained one his central influences.