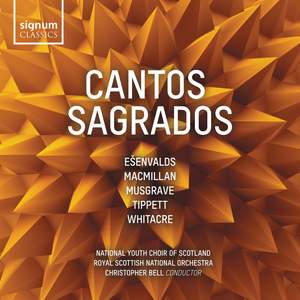 Christopher Bell’s beautifully assembled programme is completed by Biebl’s attractive setting of the Ave Maria. In addition to their impeccable tuning, vocal balance and tone quality, you can... — Choir & Organ, May 2020, 5 out of 5 stars More…

Musgrave: On the Underground, Set 2: The Strange and Exotic

II. I Saw a Peacock with a Fiery Tail

Tippett: Five Negro Spirituals from A Child Of Our Time

The National Youth Choir of Scotland is an outstanding choir for young people aged 16 to 25, directed by world-renowned conductor Christopher Bell. Membership is granted by yearly auditions to singers born, resident or studying in Scotland. In 2012 the choir was presented with the Royal Philharmonic Society’s Ensemble Award.

Formed in 1891 as the Scottish Orchestra, the company became the Scottish National Orchestra in 1950, and was awarded Royal Patronage in 1977. The Orchestra’s artistic team is led by Danish conductor Thomas Søndergård, who was appointed RSNO Music Director in October 2018, having previously held the position of Principal Guest Conductor.

NYCOS and RSNO join forces to create an eclectic mix of recordings, performing some timeless classics, as well as exploring some contemporary repertoire. The excellent stadards of both ensembles makes for an exciting listen in what is NYCOS’ first recording with Signum.

Christopher Bell’s beautifully assembled programme is completed by Biebl’s attractive setting of the Ave Maria. In addition to their impeccable tuning, vocal balance and tone quality, you can hear the enthusiasm the NYCOS have for this music and the sheer pleasure they take in sharing it with us.

From that first earth-shattering orchestral down-beat…you are pinned in place...The NYCOS and Royal Scottish National Orchestra seize the possibilities of a piece so much bigger in stature than length and refuse to relinquish a moment of drama, articulation, contrast or precision…It’s a supremely effective work impeccably delivered by these young and agile singers. The choir’s superb technique is even more evident in the two Eric Whitacre works.