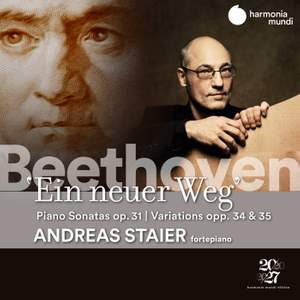 The year 1802 was a decisive one for Beethoven. In the autumn, he wrote the Heiligenstadt Testament, in which he clearly expressed his awareness of the outcome of his inexorably increasing deafness. At almost the same time, he told his friend Krumpholz that he was, "not satisfied" with his "work so far," and he was planning to embark on "a new path." The works, skillfully grouped together by Andreas Staier, correspond precisely to that new direction.

These are stimulating performances, brought off with real aplomb

It is very rare that a fortepiano recording is executed so perfectly. In concert, the instrument is capable of exquisite subtlety, but that doesn’t often translate to the recording studio, where microphone placement can sully the player’s best intentions. Here, there is a synergy of recording, performance, and interpretive vision that never fails to intrigue and very often impresses.

This stimulating disc, recorded on an instrument of 1810, illustrates Beethoven’s “new path”. The Op 31 sonatas show an unprecedented, almost improvisatory audacity of harmony.

The playing here is a model of restraint and good musical sense; even in the so called Tempest Sonata, Op 31 No 2 in D minor, nothing is pushed too hard, as if clarity matters above everything. There are times, in fact, when it’s all a bit too well-mannered...But overall these performances are models of thoughtfulness and insight.