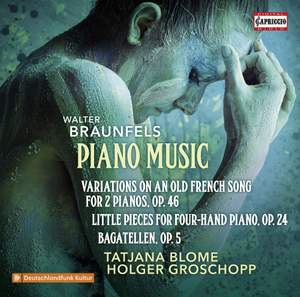 Variations on an Old French Song for 2 Pianos, Op. 46

There has been a very pleasing, steady renaissance of interest in the music of Walter Braunfels and, having released recordings of his better-known works, it's reasonable to now turn the spotlight on his less noted compositions. This release features a programme of Braunfel’s works for solo piano, piano and four hands, and two pianos. Although his pieces for solo and four-hand piano are not particularly well known, they are an important aspect of the output of a composer who began his career as a pianist.