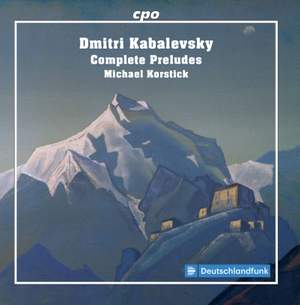 This disc is confidently recommended, both for Korstick’s muscular virtuosity and for Kabalevsky’s imaginative handling of a mainstream style. At his best, this composer wrote highly polished... — Fanfare, Jan/Feb 2021 More…

No. 1, Summer Morning on the Lawn

No. 2, Becoming a Younger Pioneer

No. 3, Eventin Song by the River

No. 4, At the Young Pioneer's Camp

Along with Prokofiev, Shostakovich, and Khachaturian, Dmitri Kabalevsky was one of the ‘Big Four’ of Soviet music. Following our recordings of his four symphonies, complete works for piano and orchestra, cello concertos, string quartets, and complete piano sonatas, this release again turns to his keyboard music featuring works for piano solo, this time focusing on his complete preludes. Bach’s idea to set a monument to the well-tempered system by writing two cycles of twenty-four preludes and fugues in all the major and minor keys has continued to fascinate composers of all succeeding generations, and Kabalevsky was no exception. His multifaceted preludes not only are obliged to Scriabin but also already reveal his own personal style and show him striving to develop new harmonic solutions. Yet another interesting rarity for piano fans!!

This disc is confidently recommended, both for Korstick’s muscular virtuosity and for Kabalevsky’s imaginative handling of a mainstream style. At his best, this composer wrote highly polished music.