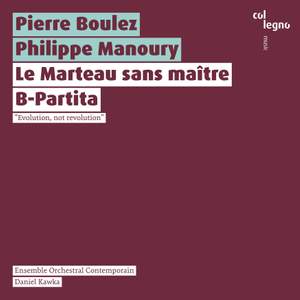 Pierre Boulez’ Le Marteau sans maître is one of the essential compositions of the 20th century. Now, for the first time, this masterpiece appears on the same record as B-Partita, a tribute of French composer Philippe Manoury’s (*1952) to Boulez. Basing his music on texts by René Char, Boulez (1925-2016) vacillated between extremes: Celestial sounds are contrasted with pulsing rhythms. Free-flowing passages meet rigid meters. Sung passages follow purely instrumental writing. The music is ever changing, but the goal of its metamorphosis remains constant and discernable. With the particular instrumentation, which aims at the gradual deconstruction of a singing voice into percussive elements (a style Boulez would come back to for the rest of his career), the young, 30-year old Boulez was coming into his own as a composer. Manoury’s B-Partita, meanwhile, sees itself as a sympathetic homage to precisely that, Boulez’, musical language.