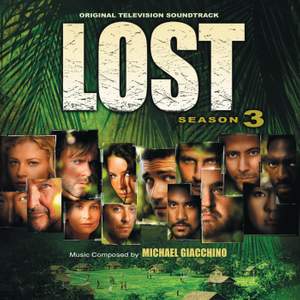 Giacchino: In With A Kaboom!

Giacchino: Eko Of The Past

Giacchino: Under The Knife

Giacchino: Achara, Glad To See Me?

Giacchino: The Good, The Bad And The Ominous

Giacchino: Benomination Of The Temple

Giacchino: An Other Dark Agenda

Giacchino: Sticking To Their Guns

Giacchino: Torture Me Not

Giacchino: Through The Locke-Ing Glass

Giacchino: The Only Pebble In The Jungle

Giacchino: Just What The Doctor Ordered

Music by Michael Giacchino. Two disc set of 67 tracks total. Meet The Others! Season Three of the blockbuster series LOST got of to a mysterious start and worked up a tremendous amount of excitement before unveiling one of the most jaw-dropping moments in recent television history to close its thrilling season finale. LOST fans have been going crazy waiting for this Season 3 soundtrack. Composer Michael Giacchino composed some of his most complex and captivating music for LOST's third season. So here's our own LOST surprise -Disc One of this Season 3 soundtrack contains the best music from the season up to the two-hour finale. Disc Two features the complete original score from the two-part finale episode Through The Looking Glass.