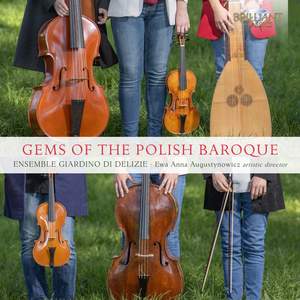 Offer, Gems of the Polish Baroque

• The close relationship between Italy and Poland goes back many centuries. Especially during the Baroque era the contact was intense. The republic of Venice was seen as a role model of political innovation, whereas Rome was firmly established as the international center of the powerful Catholic Church. Young Poles visited and studied at the universities of Bologna and Padua, imbibing knowledge and culture, whereas the Polish nobility invited Italian musicians at their courts.

• This new recording presents Polish composers from the Baroque, in whose works influences from their Italian contemporaries can be found. The composers presented are Marcin Mielczewski, Kaspar Foerster, Mikolai Zilenski, Adam Jarzebski, Stanislav Szarzinski, in Sonatas, Canzonas, Fantasias and other Baroque forms.

• Played on period instruments by Giardino di Delizie, a female Polish-Italian Early Music group, researching and performing forgotten treasures from the Italian and Polish Baroque. They played in such ensembles as Europa Galante, Les Eléments, Quatuor Mosaiques and others. They successfully recorded previously for Brilliant Classics a CD with Sinfonias by Lonati.