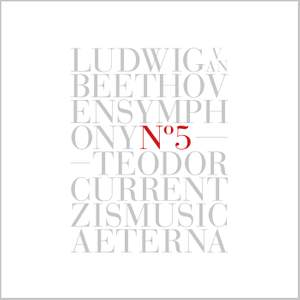 In this most celebrated of symphonies the players sound at times as though they might explode with excitement. Where appropriate, they generate a rapier-like thrust that sweeps aside conventional... — BBC Music Magazine, July 2020, 5 out of 5 stars More…

Teodor Currentzis is today’s ‘hottest’ conductor, making headlines wherever he per- forms, whether with his self-grounded orchestra MusicAeterna or with the recently formed German SWR Orchestra of which he is inaugural Chief conductor. His and MusicAeterna’s eagerly awaited American debut in November 19 (Verdi’ Requiem) had the media universally raving about their performance “Absorbing, insightful and... remarkably transparent (The New York Times); “A revelatory performance (The Wall Street Journal)”; “They were awesome (Financial Times)”

In this most celebrated of symphonies the players sound at times as though they might explode with excitement. Where appropriate, they generate a rapier-like thrust that sweeps aside conventional thinking. It’s an exhilarating helter-skelter ride, which finds Currentzis (as if in full meditative flow) focusing on the music’s emotional narrative with electrifying powers of single-minded concentration.

...the orchestra is a little smaller than many other modern-instrument orchestras that have recorded it. That helps to keep this recording airborne. What else makes this performance work? The answer is in fast tempos, vehement attacks, lightning-fast dynamic changes, and transparency of sound. Come and be thrilled, then, even if you are not converted, and hope that the Symphony No. 7 that must be waiting in the wings will be at least as exciting.

It is one of those incendiary accounts that blows away the crust of familiarity to suggest anew the revolutionary force built into this master score. I won’t suggest that this Fifth is the best; there are other ways of enriching Beethoven beyond Currentzis’s cut-and-thrust approach. Yet I cannot recall, live or recorded, a previous orchestra beavering away at speed with such precise and thrusting articulation. It really is a wonder.