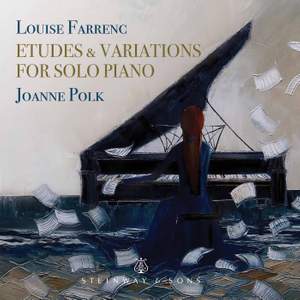 French pianist and composer Louise Farrenc commanded an important presence in the musical life of 19th century Paris alongside her more well-known compatriots Chopin and Liszt. As a composer of piano music, Farrenc produced an important collection of 30 etudes written in all major and minor keys. The present recording offers 13 of these etudes as well as 3 sets of variations, including ones based on Bellini’s Norma and Meyerbeer’s Les Huguenots. Joanne Polk received her Bachelor of Music and Master of Music Degrees from The Juilliard School, and her Doctor of Musical Arts Degree from Manhattan School of Music. She has given master classes at many summer festivals and universities across the country, including Summit Music Festival, New York Summer Music Festival, Montclair State University, Kutztown University, and at the University of Minnesota. In August 2012, Ms. Polk was one of three directors launching Manhattan in the Mountains, a three-week summer music festival in the Catskill Mountains, devoted to chamber music, solo performing, and community engagement. Ms. Polk recently completed a five-city, three-week concert and master class tour of Taiwan and China. As well, in 2019, two of Ms. Polk’s albums were included on New York City’s classical radio station WQXR’s Essential Piano Recordings. Ms. Polk is a member of the piano faculty of Manhattan School of Music and is an exclusive Steinway artist.