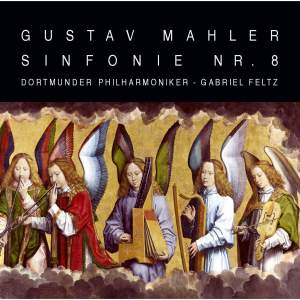 Ever since its triumphal premiere on 12th September 1910 in Munich, Mahler's 8th Symphony in E flat major has had the reputation of being, along with Arnold Schönberg's 'Gurre-Lder' the piece on the whole of the symphonic repertoire calling for the largest number of participants. This new recording has a number of musicians much less than the average, but Gabriel Feltz sees it more like a great chance. He used flanking positions for the choir in relation to the orchestra and larger parts of the choirs were facing each other, which gives especially the first parts, a stereophonic effect. For Feltz these performances of Mahler's 8th symphony on 3rd and 4th July 2018 were especially successful and fulfilling moments in his life as a musician.