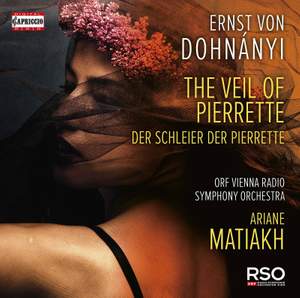 Dohnányi: The Veil of Pierrette, Op. 18

The Veil of Pierrette premiered in 1910 as a ballet-pantomime based on a story by Arthur Schnitzler (18621931), one of Austria's most prominent fin-de-siècle figures. Ernst von Dohnányi provided the accompanying score that proved an immediate international success. Movements such as the Wedding Waltz, for example, were frequently heard on radio request shows at the time, giving the equally popular waltz sequence from Richard Strauss' Der Rosenkavalier a run for its money. The pantomime genre was entirely in keeping with the spirit of the age. Following the large-scale, plot-laden ballets of late Romanticism, pantomime explored a more intimate and naturalistic form of expression. This first complete recording of the score enables us to enjoy a fuller picture of the repertoire from this fascinating period of music history.