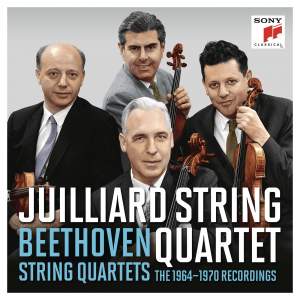 On the 'Sony Classical' label - In celebration of Beethoven’s 250th anniversary year, Sony Classical is pleased to release the internationally renowned Juilliard String Quartet’s recordings of Beethoven’s String Quartets recorded from 1964-1970. The Juilliard String Quartet, which was founded in 1946 is one of the world’s most prestigious string quartets in the world. In February 2011, the quartet received the NARAS Lifetime Achievement Award for its outstanding contributions to recorded classical music. This stunning mid-price box set will be the first ever release of the Juilliard String Quartet’s 1964-1970 Beethoven cycle, in a single x9 CD edition. 6 LPs featured on the box set appear for the first time on CD, remastered from the original analogue masters using 24 bit / 192 kHz technology. The booklet includes a with new essay by string expert Tully Potter and full discographical notes.