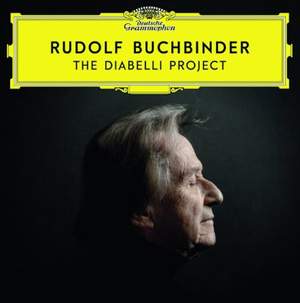 The individual variations, specially commissioned from contemporary composers and played here en suite, share an aroma of freshness due to their unfamiliarity. They also elicit from Buchbinder... — Gramophone Magazine, June 2020 More…

Dean, B: Variation for Rudi

Shchedrin: Variation on a Theme of Diabelli

Celebrated pianist and renowned Beethoven specialist Rudolf Buchbinder will release his first album on Deutsche Grammophon. The collaboration sees him record not only his own new interpretation of Beethoven's Diabelli Variations but to commission 12 new variations himself, echoing the original story where in 1819 music publisher and composer Anton Diabelli wrote a 32-bar German Dance – a forerunner of the waltz – and sent it to more than 50 Austrian composers, asking each of them to write a variation on his original theme.

Beethoven initially refused to write anything, and supposedly dismissed the theme for its banality – but four years later he sent the publisher his own Thirty-Three Variations on a Waltz by Diabelli. The set, later hailed by conductor Hans von Bülow as a “microcosm of Beethoven’s genius”, turned out to be the composer’s last completed large-scale piano work.

The individual variations, specially commissioned from contemporary composers and played here en suite, share an aroma of freshness due to their unfamiliarity. They also elicit from Buchbinder a richer and more varied palette than he uses in Beethoven…Shchedrin’s variation is the wittiest of the lot and one of the more pianistically imaginative.

This lovely album brims over with affection, exuberance and inventiveness, not only in the companion-pieces written for Buchbinder but also in the veteran Austrian pianist’s energetic account of Beethoven’s original. Of the new works, Christian Jost’s rambunctious Rock it Rudi and Jörg Widmann’s delicious ‘wrong-note rag’ variation (taking in boogie-woogie and the Radetzsky March along the way) are particular delights.