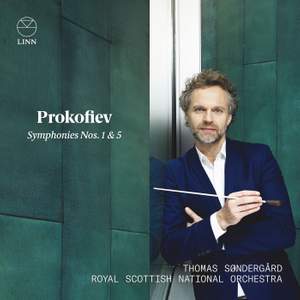 • Søndergård conducts an all-Prokofiev programme juxtaposing two contrasting symphonies: Symphony No. 1 in D major ‘Classical’ and Symphony No. 5 in B flat major.

• Prokofiev delights in paying homage to Haydn in his neo-classical masterpiece; its characterful melodies, freshness and overall joie de vivre have established Symphony No. 1 as enduringly popular.

• In contrast the Fifth Symphony was forged in the flames of war, and dedicated, Prokofiev said, to ‘the greatness of the human spirit’.

• Following a concert performance The Herald commented, ‘This was the conductor at his most energetic and impassioned, and it drew a corresponding performance from the orchestra.’

• Prokofiev has been a key focus for Søndergård since 2016 and the conductor has announced plans to complete a symphonic cycle over four seasons with his orchestra.

So what if the orchestra’s sonority is not the heftiest. It matters not a bit in the Classical Symphony. With Søndergård pursuing a good-natured middle course between the quicksilver dash of Serge Koussevitzky and the mushier trudge of Seiji Ozawa or Valery Gergiev, we’re offered a wealth of detail commonly overlooked. Bassoons chortle and violins gleam above the stave...This is fresh and engaged music-making, well worth exploring.