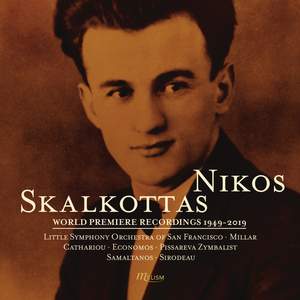 This sequence reaffirms the inventiveness of the Greek composer. His two-piano version of the misleadingly titled “overture” The Return of Odysseus is a five-part driven structure of true virtuosity…and... — Sunday Times, 13th April 2020 More…

Skalkottas: On The Beach

Skalkottas: Once Upon A Time

Skalkottas: The Return Of Odysseus

This album presents a selection of world premiere recordings of music by Nikos Skalkottas, the most important Greek composer of the first half of the 20th century. Skalkottas was described by the famous music critic and musicologist Hans Keller as one the four “S” of modern music, together with Schoenberg, Stravinsky and Shostakovich.

This was a way of putting Skalkottas on the first rank of composers who helped to define modern music, and gives an idea of his great importance. We present here the first known recording ever made of a work by Skalkottas, the two Greek Dances recorded in 1949 in Paris by the pianist Tota Economos in the French Radio studios. The famous recording of the 12 Greek Dances (selection from the cycle of 36 dances), with the Little Symphony Orchestra of San Francisco conducted by Gregory Millar was made in 1957. It was issued and was known initially as a monophonic recording, but has been reworked from the recording tape, and published here for the first time with a real stereophonic sound.

The Suite for violin and piano was composed in 1929 in Berlin. The work was originally composed for violin and orchestra, and is among the many compositions by Skalkottas lost after his hasty departure from Berlin in 1933. This version by the composer, for piano and violin, has been recently found in America.

The score has been published at the Hellenic Music Center in Athens with the help of the Lilian Voudoury Greek Music Library, which now possesses the totality of Skalkottas’s manuscripts.

The Return of Odysseus, for two pianos, a major work of Skalkottas, was recorded in the Great Hall of the Moscow Conservatory in 1994, shortly after having been first introduced to the public. The version published here is revised from the the document published in 1995. Angelica Cathariou, Nina Pissareva Zymbalist, Nikolaos Samaltanos and Christophe Sirodeau have all taken an important part in the first complete recording of Skalkottas’s music, in a series which has been internationally acclaimed.

This sequence reaffirms the inventiveness of the Greek composer. His two-piano version of the misleadingly titled “overture” The Return of Odysseus is a five-part driven structure of true virtuosity…and the Little Symphony Orchestra of San Francisco’s recording of 12 Greek Dances is pure tonal exhilaration.