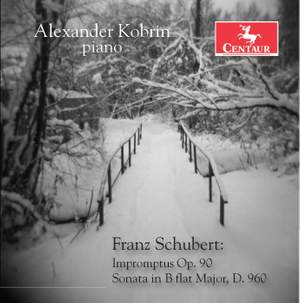 The Schubert Impromptus Op. 90 and Sonata in B-flat Major are two of the greatest of Schubert's piano works. Winner of major competitions, Alexander Kobrin gives magisterial performances of these great works. Called the “Van Cliburn of today” by the BBC, pianist Alexander Kobrin has placed himself at the forefront of today's performing musicians. His prize-winning performances have been praised for their brilliant technique, musicality, and emotional engagement with the audience. The New York Times has written that Mr. Kobrin was a “fastidious guide” to Schumann’s “otherworldly visions, pointing out hunters, flowers, haunted corners and friendly bowers, all captured in richly characterized vignettes.” “This was a performance that will be revered and remembered as a landmark of the regeneration of exceptional classical music in Central New York.”-critic wrote after Mr. Kobrin’s performance of Second Piano Concerto by Johannes Brahms with Syracuse Symphony in Syracuse, NY.