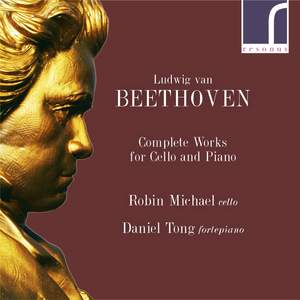 Cello and piano duo Robin Michael and Daniel Tong return to Resonus with this dazzling collection of the complete works for cello and piano of Ludwig van Beethoven. Written across his productive life, they contain much that is considered pioneering and innovative within the genre. The five sonatas and three sets of variations form a considerable contribution to the cello and piano repertoire, from the formative early Op. 5 sonatas composed as a young man, to the much later Op. 102 sonatas, penned following his infamous hearing loss. Rarely heard on disc performed on period instruments, Michael and Tong record these celebrated works using a cello after Matteo Goffriller from 1695 and a fortepiano after Anton Walter from c.1805.

Michael and Tong take on this key repertory in a spirit of fresh, fearless égalité, stylistic certainty and all-round technical brilliance… a thrillingly rewarding contribution to Beethoven’s 250th anniversary year.