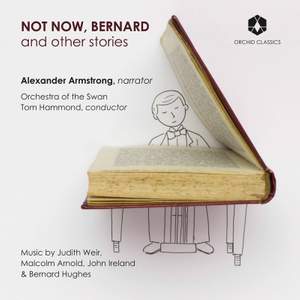 Not Now, Bernard and other stories

The children’s stories set to music by Bernard Hughes have oodles of character. Alexander Armstrong’s narration, charming in those stories, feels out of place in the Ireland and Weir. — BBC Music Magazine, April 2020,

The Knight Who Took All Day, Pt. 2

Actor, broadcaster and comedian Alexander Armstrong stars as narrator in this irresistible album of world premiere recordings, which revels in the magical colours of childhood memories. Not Now, Bernard is an all-time classic story by David McKee, set to music by Bernard Hughes (b.1974) with melodic charm and a subversive sense of fun. Alexander Armstrong recounts it along with companion piece Isabel's Noisy Tummy as well as Hughes's The Knight Who Took All Day, which challenges chivalric convention with its subversive story of female empowerment. Conductor Tom Hammond and members of the Orchestra of the Swan shape compelling interpretations, enriched by Armstrongs gleeful narration. They also raise a riot of sound in Malcolm Arnolds Toy Symphony (1957), complete with quail cuckoo, guards whistle and gloriously irritating toy trumpets. The albums mood darkens in John Irelands haunting melodrama Annabel Lee, a spine-tingling setting of Edgar Allan Poes final poem presented here in Bernard Hughess specially arranged chamber version, before Armstrong breezes through Judith Weirs brilliant Thread! (1981), an early work inspired by the Bayeux Tapestry's cartoonish images.

The children’s stories set to music by Bernard Hughes have oodles of character. Alexander Armstrong’s narration, charming in those stories, feels out of place in the Ireland and Weir.