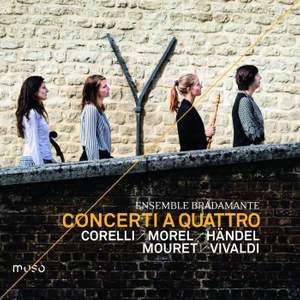 The journey begins in Italy with Arcangelo Corelli, who vastly developed the musical form of the concerto grosso, this latter exercising a major influence on all music in eighteenth-century Europe. One of these 'Concerti', the 'Concerto fatto per la notte di Natale', was especially well received and has become a great classic of the Christmas repertory. The journey continues with French and Germanic composers. First of all, the 'Chaconne en trio' by Jacques Morel, a pupil of Marin Marais, which by its style resembles the dialogue concertos of this programme, and highlights the high register of the too rare five-stringed cello. There follows the 'Concerto a quattro' by Handel, discovered in 1931 in Bavaria, its authorship recently called into question as it seems it must be attributed to Telemann; the musical style is marked by an intense expressivity, and could well have come from the pen of either composer. We then return to France with the remarkable 'Concert de chambre' of Jean-Joseph Mouret, a man of the Provence region exiled to Paris known above all for his stage music (lyric tragedies, heroic ballets). Finally we come back to Italy with the 'Concerto, RV103' by Antonio Vivaldi, featuring the lyrical recorder in the solo parts while the oboe oscillates between the roles of ripieno and of partner in the sections of dialogue. With a three-movement structure, the concerto ends in a whirlwind of colour.