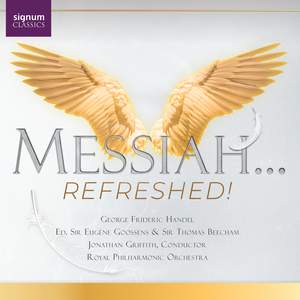 A recording of Messiah in all its multi-coloured splendours as reimagined by Sirs Eugene Goossens and Thomas Beecham…To purists the additions are jaw-dropping. But striking too are the subtractions…Dishing... — BBC Music Magazine, June 2020, 3 out of 5 stars More…

Pt. 1, no. 14. There Were Shepherds Abiding in the Field. And Lo, the Angel of the Lord Came Upon Them

The Goossens Messiah, recorded for the first and only time by the Royal Philharmonic Orchestra and Chorus under Sir Thomas Beecham, has stood as a landmark of the classical catalogue for sixty years. Goossens’ richly orchestrated version is set to reach a new audience thanks to Maestro Griffith and DCINY, New York City’s leading promoter of classical music.

They gathered at Abbey Road Studios in London in July 2019, to record the work with the Royal Philharmonic Orchestra and a chorus comprising of sixty members of The Jonathan Griffith Singers, drawn from around the world and sixty members of the National Youth Choir of Great Britain. The new recording has captured the score’s vibrant tone colours in thrilling high-definition sound.

A recording of Messiah in all its multi-coloured splendours as reimagined by Sirs Eugene Goossens and Thomas Beecham…To purists the additions are jaw-dropping. But striking too are the subtractions…Dishing up a rich, lustrously executed bowl of nostalgia, Jonathan Griffiths conducts with evident relish an affection, even if Beecham’s instinctive ‘lift’ is less to the fore.

It is fascinating to hear the first recording of Goossens’s technicoloured treatment since 1959. The present-day Royal Philharmonic Orchestra play with dignified nobility, although Goossens’s hyperactive switches of colours in the Sinfonia gild the lily...The combined National Youth Choir of Great Britain and Griffith’s own chorus sing with weighty stateliness.