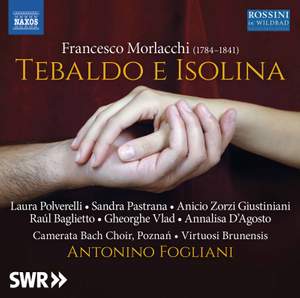 Mezzo-soprano Laura Polverelli has an appropriately rich and colorful voice for the trouser role of Tebaldo. For the greater part, Polverelli’s assumption of the role is musically and dramatically... — Fanfare, September/October 2020 More…

Francesco Morlacchi was a native of Perugia, but early success led him to become music director of the Dresden Opera where he remained for the rest of his life despite having an opportunity to succeed Rossini in Naples in 1822. He did make tours to Italy however, and Tebaldo e Isolina received its triumphant premiere in Venice, becoming the most successful of all his operas. Morlacchi’s gifts as a lyricist and for characterisation are heard here at their best, with showpiece arias and duets in a version of the Romeo and Juliet story that ends in happiness and the victory of reason over vengeance.

Mezzo-soprano Laura Polverelli has an appropriately rich and colorful voice for the trouser role of Tebaldo. For the greater part, Polverelli’s assumption of the role is musically and dramatically convincing. The sound of the in-performance recording is quite fine, offering a wide dynamic range, ample color and detail, and a well-tuned balance between the orchestra pit and stage.

There are traces of Rossini in the score, especially in the very jolly Overture and some rousing choruses, but the vocal writing isn’t terribly distinctive...Antonino Fogliani leads a spirited Virtuosi Brunensis.

The soprano Sandra Pastrana may not always be fully on top of things as Isolina, her high notes especially; but she’s game and has definite expressive purpose...Polverelli certainly knows what to do with the music, including the role’s often highly ornate vocal lines, and can rely on complete vocal security…The recording was made live in July 2014 at the Rossini in Wildbad Festival, with perfectly decent choral and orchestral forces and with the conductor Antonino Fogliani providing impetus.