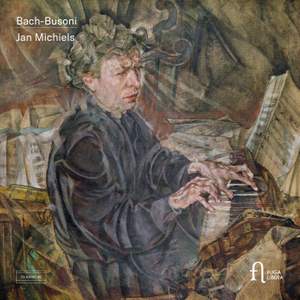 Michiels plays the Preludes with admirable flexibility and in some, notably ‘Wachet auf’, an almost baroque-like approach to articulation. The Preludes are performed on a Bechstein piano of 1860... — BBC Music Magazine, May 2020, 4 out of 5 stars More…

For Ferruccio Busoni, Bach’s music was the root and the foundation of piano playing. His many transcriptions confirm this point of view, whilst his monumental Fantasia Contrappuntistica attempts to provide a conclusion to Bach’s unfinished Kunst der Fuge. Busoni received a great deal of criticism for this, to which he replied “the musical art-work exists both within and outside of Time… there is no Old or New. There is only Known or Unknown”. Today — one century and many fashions of “authentic” ways of performing Bach later — is possibly the time to rediscover the true voice of this great musician; for Bach, music was like “a divine child who did not touch the earth with his feet but floated on air”. Jan Michiels takes you into this divine air with an ‘old’ Bechstein from 1860 as well as with a brand new Straight Strung Grand Piano by Chris Maene.

Michiels plays the Preludes with admirable flexibility and in some, notably ‘Wachet auf’, an almost baroque-like approach to articulation. The Preludes are performed on a Bechstein piano of 1860 with straight, parallel stringing…For the Fantasia contrappuntistica of 1910 Michiels uses a modern piano built by Chris Maene…the clarity of sound is admirable.

Favouring headlong tempos, Michiels channels his reserves of virtuosity towards architectural continuity throughout the Bach/Busoni Chaconne, while providing more flexible contrast in the major-key episodes. This strong performance constitutes Michiels’s most cohesive,
fluent and satisfying playing over the course of an uneven release.