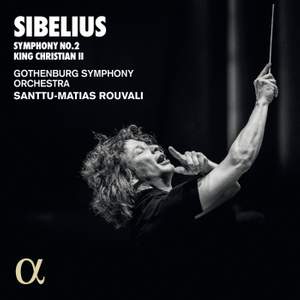 The evidence here is of a serious artist, with a strikingly individual, but in no way contentious view of Sibelius’s much-performed symphony. The Gothenburg Symphony Orchestra must have played... — BBC Music Magazine, June 2020, 4 out of 5 stars More…

After the resounding success of Volume 1 (Gramophone Editor’s Choice, Preis der Deutschen Schallplattenkritik, Diapason d’Or, Choc de Classica, FFFF Télérama), the project to record the complete Sibelius symphonies continues with the Gothenburg Symphony Orchestra and Santtu-Matias Rouvali, whose career as a conductor is entering top gear: he has just been appointed Principal Conductor of the Philharmonia Orchestra in London. At the turn of the twentieth century, as Finland struggled to free itself from Russian rule, Sibelius and his wife faced several domestic dramas, including the loss of one of their daughters, Kirsti, to typhoid fever. The Second Symphony, written in the brilliant key of D major, seems to be marked by the events of the composer’s private life, but many of his contemporaries nevertheless saw it as a political manifesto! In 1898, Sibelius composed the incidental music for Adolf Paul’s play King Christian II, the story of the downfall of a king of Scandinavia (Denmark, Sweden and Norway) in the sixteenth century. The suite derived from it was successfully performed in several European cities.

The evidence here is of a serious artist, with a strikingly individual, but in no way contentious view of Sibelius’s much-performed symphony. The Gothenburg Symphony Orchestra must have played this work so often that they almost know it by heart, so the freshness and quality of their response here says much about Rouvali’s approach. He has a seemingly unerring instinct for knowing when to let the music’s processes unfold as if of their own accord.

his tinkering with tempo and dynamics all serve the music in a positive light. It is a refreshing and enlightening performance…the playing from the Gothenburg Symphony is all one could want.