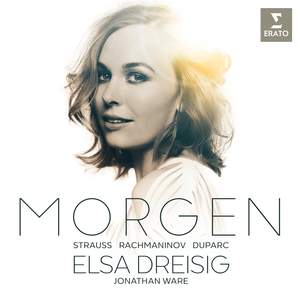 These performers are in their element with pieces that contains hints of a narrative…In general, the Rachmaninov performances are better than those of Duparc where there is sometimes a problem... — BBC Music Magazine, April 2020, 4 out of 5 stars More…

“Phenomenally good … Dreisig’s voice [is] youthful yet assured, agile yet fluid, and powerful through its entire range … We can certainly expect much more to come from this singer,” wrote BBC Music Magazine in its five-star review of Miroir(s), Elsa Dreisig’s debut album of operatic arias and scenes. It was subsequently nominated for two top awards, Gramophone and Opus Klassik.

The young French soprano has now teamed up with American pianist Jonathan Ware for a recital of songs by Richard Strauss, Sergey Rachmaninov and Henri Duparc. It takes its name from one of Strauss’ best-loved songs, ‘Morgen’. As Elsa Dreisig point out: “’Morgen’ means tomorrow, but it also means the morning and, in a poetic sense, the East … where everything starts or starts anew.”

Strauss wrote ‘Morgen’ in 1894, when he was just 30 years old, but it is music from the end of his life, 1948, that traces a thematic thread through this album: the Vier letzte Lieder or Four Last Songs. These glorious songs are best known in their sumptuous orchestral version and are generally performed as a single work (though that was not necessarily how Strauss conceived them). Here, Jonathan Ware accompanies Elsa Dreisig on the piano and the four songs are interspersed through a recital programme that includes 17 other numbers (both songs and pieces for solo piano) and which highlights thematic connections and reflections.

For instance, it starts with Duparc’s famous setting of Baudelaire’s ‘L’invitation au voyage’, summoning the listener on a journey. Then comes the exhilarating, airborne ‘Frühling’ (Spring) from the Vier letzte Lieder. Appropriately, this is followed by two flower songs – Rachmaninov’s ‘Daisies’ and Strauss’s ‘Malven’ (Mallows), the last work he ever wrote, which only came to light in 1984 after the death of its dedicatee, the great soprano Maria Jeritza. Then comes another song by Duparc, the sensuous Phidylé, which evokes a woodland setting and the colours and scents of hyacinths, violets and roses. As Elsa Dreisig says, “Morgen is an inner journey through the seasons of the soul.”

Jonathan Ware explains that: "For this recital, Elsa and I chose three composers who each wrote in instantly recognizable styles – Strauss, Rachmaninov and Duparc.” (Born in 1864, 1873 and 1848 respectively, they represent different aspects of late Romanticism.) “While each composer had his own distinctive sound world, the three shared a penchant for rich harmonies, soaring melodic invention, and an almost kaleidoscopic approach to making light and colour audible … The Vier letzte Lieder … serve as signposts for our own inward journey through the seasons of life. Along our own journey we are assured that even as winter’s coldest winds blow, spring will come, just as we know that after night’s deepest darkness wakes the new brightness of morning."

These performers are in their element with pieces that contains hints of a narrative…In general, the Rachmaninov performances are better than those of Duparc where there is sometimes a problem with colouring the fleeting harmonic changes…[Morgen] is certainly one of the finer performances available.

One of the most purely seductive recitals to have come my way for a long time… in Dreisig’s introspective, understated performances we hear the Four Last Songs anew, each one fascinatingly set apart from the others in its new context… And thanks to Ware’s superbly dappled and delicate way with the accompaniment, they come across less as pale imitations of the orchestral originals than something like evocative, distantly remembered echoes.

This French-Danish artist is a fine linguist, although her Strauss would benefit from more incisive word-end consonants. But her lyric potential is heard to best advantage in Duparc’s Chanson triste and Phidylé, while Strauss’s title track benefits from eloquent playing of the prelude and postlude by Ware.